The one and only

There are many versions of the story of where and when Padel first began, but we believe the version provided by the Spanish Padel Federation. Padel began in Acapulco (Mexico) in 1969, when a contractor by the name of Enrique Corcuera modified a plot of land measuring 20 metres by 10 metres on his estate, by putting up walls on the ends and sides of the plot to prevent the spread of vegetation on to the court. A Spanish friend of Mr Corcuera, and a frequent visitor to Mexico, brought the idea back to Marbella. This man’s name was Alfonso Hohenloe, and he installed a court in the club in Marbella, which he owned. Many polo players who came from Argentina learnt the game of Padel in Marbella, and on their return to Argentina, began to spread the word that Padel was fun, and accessible, due to the low installation costs.

As a result, the game grew throughout Argentina and Spain, where it was beginning to be played in very distinguished places, as the players who visited at that time took the idea back to their club. More and more clubs followed due to the accessibility of the sport and the attraction to players of varied ability to enjoy the sport on the same court. Spain with 135,000 Padel courts is supporting 2,500,000 registered players.Argentina has 4,500,000 registered players. It is no coincidence that Spain and Argentina now have the best racquet sports players in the world. Padel has overtaken its ‘older brother’ tennis as the primary sport in Spain. Every year, around 900,000 padel racquets are sold compared to 400,000 tennis racquets. This padel mania is spreading all over the country and is no longer a secret that many Spaniards cheated on tennis and fell addictively in love with padel.

The first court in Thailand

What is Padel? Padel is a mix between Tennis and Squash but it is mostly played as double. The biggest difference between Padel and normal Tennis is that the court has walls, and the balls can be played off them in a similar way to the game of Squash. The rackets are very different to a normal tennis racket, being much thicker, with holes going through the middle, but feel about the same weight to hold.

Instead of the sidelines and the baselines the edge of the Padel court is formed by a 2 to 3m high glass wall coupled with some wire fences. the size of the court is 10 m by 20 m.

Serving: Unlike tennis the serves are underhand, The ball must be hit waist or below for the serves only. The serve must clear the net directly into the opponent’s diagonal service box. The ball is dropped onto the floor where the ball must bounce on to the wall. however if, after the ball bounces in the service box, it goes on to hit the metal fence, this is a fault. The opponent can choose to hit the ball before or after it hits the wall. Once the ball has landed in the correctly has been returned correctly, the whole of the playing surface are in play.

Play: Padel is usually played as a doubles game although it can be played as singles. During rallies the ball is only permitted to hit the playing surface once. A player can choose whether to volley the ball or to let it bounce. If the ball bounces it must land directly onto the playing surface without previously hitting the fence or walls. If this happens it would constitute a fault.

After hitting the surface, the ball can hit the fence or the walls, any number of times before the ball is returned over the net. The opponent can hit the ball directly back to the server or they can hit the ball onto their own walls, before returning it. If the ball bounces twice on the playing surface this is a fault.

Scoring: The scoring is the same as in a game of Tennis. the points are 15, 30, 40 and game, with deuce at 40–40. Then two clear points need to be won before the game is finished. And the game is won from the best of three sets.

Instruction: Now here in Koh Phangan you can step on the court with us we can give you an introduction to the sport and teach you the basic serve and shots, giving you tips on how to make use of the walls of the court and tactical advice.

We will provide you racquets and balls

The court have lights, You can enjoy playing into the night.

What about our Padel Suites ?

Padel Phangan suite is a complex of 13 apartments with contemporary design, creating an elegant holiday haven that shines out from the crowd, but not far for Phangan nightlife. Our resort simply exudes luxury and comfort. Enjoy a relaxing break on Koh Phangan in the unique and laid-back surroundings of a tropical paradise, relax on our private beach and restaurant at Haadkhom road or around our infinity pool watching sunset. Each of our modern suites has a balcony or terrace, fully equipped kitchen and is lavishly equipped with a flat-screen TV with international channels, and has an en-suite bathroom with rain shower and towels. There’s a fridge with complimentary bottled water replenished each day, and there’s a daily housekeeping and turn-down service, and there is free WiFi throughout the property. We are leaving on Koh phangan for many year, enjoying everyday hosting new visitor and like to share our experience and knowledge of this beautiful country and island of Koh Phangan.

We are situate in the north west of Koh Phangan island very famous for snorkeling, our nearby beach Haadkom, is just 7 minute walk and this is the spot number one on the island, is also a start for a hiking to get to bottle beach (haad khuat) 1h30 walk through the jungle, the way back can be organized with a taxi water bring you back directly on the beach at our property. Chaloklum fisherman village is an authentic thai life, many different style of restaurant for all walet, fresh market, fresh food, 7/11, daily fisherman boat arrive earlier every day delivered fresh seafood. Use our car and bike rental for explore the rest of the island with a advice of our general manager

Follow us on social media to keep up-to-date with latest news, discounts and events. 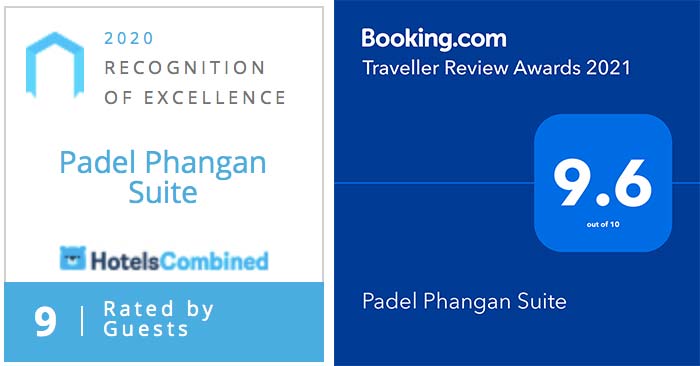 You can unsubscribe from these at any time – just click on the "Unsubscribe" link included in each newsletter.